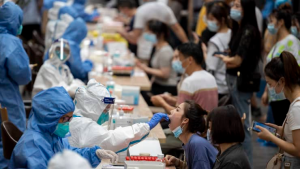 The southern Chinese city of Guangzhou has reported zero new locally transmitted coronavirus cases for the first time since a new cluster of cases cropped up in May. An uptick in cases led to a lockdown and mass testing threatening global trade.

On Tuesday, health authorities found no new confirmed cases in Guangzhou, a city of over 15 million people which became China’s new Covid hotspot.

The first new case, a 75-year-old woman, was detected on May 21. It was the first time the delta variant of the virus, first identified in India, was detected in China.

Authorities were concerned because of the highly transmissible nature of the variant and took action swiftly.

Lockdown is still prevalent in Liwan, in the west of Guangzhou. People were not allowed in or out of these areas except under special circumstances. Some restaurants had to close, while others operated take-out only or at a reduced capacity.

Health workers lined the streets of Guangzhou to carry out mass coronavirus testing on the population. Tens of millions of people have been tested in the last two weeks.

It was also reported that the police in Guangzhou fined as well as detained several individuals who allegedly broke laws such as not wearing masks in public, or not cooperating when asked to take a coronavirus test.

Guangzhou’s outbreak, which threatened to spread more broadly across the Guangdong province, an economic and trading powerhouse, has also impacted shipping. Increased checks and virus prevention measures have caused delays at the shipping ports with experts warning it could lead to disruptions to the global supply chain.

Authorities have also urged people to get vaccinated in Guangdong province and across China. Over 900 million doses of vaccine have been administered in the country.
While one day of zero new cases is a positive development, authorities will be hoping it can be sustained so they can eventually fully reopen the local economy and take areas out of lockdown.