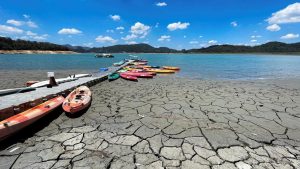 With the rising temperature every year, it is more likely that the world would reach its key temperature limit in the next five years.

A recent report says that by 2025, every year being 1.5C hotter than the previous industrial level; there are 40 % chances of reaching the key temperature.

The conclusion is provided by the report which is published by World Meteorological Organization (WMO). The analysis is based on the research of 10 countries including China and the US.

Previously, in the last decade, reaching the threshold temperature of 1.5C by every year was confirmed by 20% only but the new report put those risks up to 40%.

A senior UK Met Office scientist, Leon Hermanson said in a statement that there is a clear rise comparing the temperature of those 1850-1900 shows an evident rise.

He further said, “What it means is that we’re approaching 1.5C – we’re not there yet but we’re getting close.” He also added, “Time is running out for the strong action which we need now.”

However, the researchers said that if of one of the next five year reach the 1.5c above the pre-industrial level, it will only be a temporary situation.

Natural variability shows that the following few years will be a little bit cooler but there will another two decades when the limit of 1.5c is permanently crossed.

The latest Paris Agreement has established a goal for all the countries around the world to keep the rising temperature under 2 degrees Celsius and strictly to surpass the limit of 1.5C in a single year. The goal is not set to remain for only one year but a long-term way to save ourselves.

Director of research at the Grantham Institute, Imperial College London, Dr. Joeri Rogelj said, “the 1.5C in the Met Office announcement should not be confused with the 1.5C limit in the Paris Agreement”.

He further added that “The Paris targets refer to global warming – that is, the temperature increase of our planet once we smooth out year-to-year variations,”.

Explaining further he said, “A single year hitting 1.5C, therefore, doesn’t mean the Paris limits are breached, but is nevertheless very bad news. It tells us once again that climate action to date is wholly insufficient and emissions need to be reduced urgently to zero to halt global warming.”

Prof Petteri Taalas, Secretary-general of The WMO said, “This study shows – with a high level of scientific skill – that we are getting measurably and inexorably closer to the lower target of the Paris Agreement on Climate Change,”.

He also said, “It is yet another wake-up call that the world needs to fast-track commitments to slash greenhouse gas emissions and achieve carbon neutrality.”

Climate scientist Prof Ed Hawkins said, “It’s not a sudden cliff edge, it’s more like a slope that we’re already on and, as the climate warms, the effects get worse and worse.”

The Center for Advancing Innovation and Ignite Social Impact Announce Partnership with U.S. Coalitio...
Sorditcon Private Limited appoints senior professional Pankaj Arora as an Advisor on the board
The Gunmen of Nigeria killed many cinema-goers in Zamfara
Music
Category
Latest News