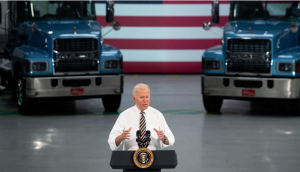 Do you want to meet President Joe Biden? Consider relocating to Pennsylvania.

That is where the President returned. Wednesday was his sixth return to his birth state since entering office six months ago. He went on a tour of a Mack Trucks plant in the Lehigh Valley, spoke with local union members, and was briefed on the company’s new electric dump truck.

“It’s a lovely location,” Biden said to a facility staffer as they strolled alongside a cab assembly line. “It’s almost as though you’re in heaven. Scranton is where I’m from.”

As president, Biden has taken a very restricted tour radius inside the United States, emphasizing states that can be traveled in a day and do not need an extended stay. Aside from Pennsylvania and Delaware, where he spends a lot of time on weekends, Biden’s favorite states to visit are Ohio and Michigan, each of which he’s visited multiple times.

Repeat travels to key electoral strongholds aren’t unusual for a first-term president, even if Biden isn’t up for reelection for another three years. All are brief trips from Washington on Air Force One. Next year’s Senate elections will be held in Pennsylvania and Ohio. And, because of their working-class towns and industrial background, those states are well-suited to develop infrastructure, which is Biden’s current top priority.

Still, Biden’s propensity of returning to Pennsylvania, Ohio, and Michigan over and over has come at the expense of other regions of the country. He hasn’t been to California, the country’s most populated state, or New York, its most populous metropolis. And, with the exception of an overseas trip in June, he hasn’t spent a night away from the White House, Camp David, or his Delaware residences.

The White House refused to discuss Biden’s trip plans. However, a pattern has formed in each of Biden’s travels that highlight his focus on blue-collar people. Last week, after visiting a training center for electrical workers in Cincinnati, Biden emphasized why he has prioritized union employees.

“If every IBEW person decided they’re going to quit, this country comes to a screeching halt,” he said in a video posted to Instagram. “There’s a lot of white-collar businesses that could actually quit tomorrow and the nation is still going to move.”

Biden has previously visited Pennsylvania, when he visited a flooring firm in Chester, spoke at a carpenters training center in Pittsburgh, and celebrated Amtrak’s 50th anniversary at Philadelphia’s 30th Street Station. He even ventured into the commonwealth for a short while on Saturday, when he went to his sister Val’s house for dinner.

He’s done similar things in neighboring Ohio, where he most recently went last week, and Michigan, where he got a test drive in one of Ford’s new electric pickup trucks in May.

Six months into his administration, Biden has visited 15 states, virtually all of which are east of the Mississippi, as part of a plan that focuses on agenda items that help Americans living in middle-class areas of the country.

The Perseverance Rover Will Encounter ‘Seven Minutes If Terror’
University of Augsburg is Offering SAP Courses for Undergraduate Students
Wargroove Game Finally Gets A Physical ‘Deluxe Edition’ On Nintendo Switch And Play Station 4
The Biggest Palm Oil Producers From Malaysian Get Banned By Major Companies Around The World
Turkey Is Preparing For Its Very First Full Lockdown Due To Covid
Is This the New Song From ELIO DEEJAY?
The Federal Government Is Not In A Position To Block Provinces From Buying The COVID-19 Vaccines
Historical biography of the Sheik Fareeds of Mauritius
Music
Category
Latest News