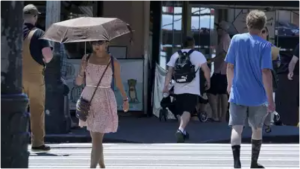 A dozen deaths have been reported in Washington and Oregon and it could be tied to an intense heatwave that has brought scorching temperatures to the Northwest. It has also caused one power utility to impose rolling blackouts amid heavy demand.

Seattle and Portland had dangerous weather conditions on consecutive days and recorded high temperatures exceeding 100 degrees Fahrenheit (37.7 degrees Celsius) eased in those cities on Tuesday. But there was a temperature spike in inland Spokane, cities in Idaho, and towns in eastern Oregon.

The National Weather Service has said that the mercury has reached 109 F (42.2 C) on Tuesday in Spokane and it is the highest ever recorded temperature over here.

About 9,300 Avista utility customers in Spokane lost power on Monday and the company has said more planned blackouts began on Tuesday afternoon in the city of about 220,000 people. The Avista vice president for energy delivery, Heather Rosentrater, has said that they are trying to limit outages to one hour per customer.

She has also said that about 2,400 customers were without power as of shortly after 2 pm Tuesday, mostly on the north side of the city and these are the customers who are alerted about the planned outage. On Tuesday, about 21,000 customers were warned that they might experience an outage.

Rosentrater also said that the outages happened because of a distribution problem and it did not stem from a lack of electricity in the system.

For the time being, authorities have said that multiple recent deaths in the region were possibly
related to the scorching weather.

The office of the King County Medical Examiner has said that two people died due to hyperthermia which means their bodies become dangerously overheated. It has been reported by big media outlets that they were a 68-year-old Enumclaw, Washington, woman and a 65-year-old Seattle woman.

On Tuesday, the office of the Snohomish County Medical Examiner has told media outlets that in Everett, Washington, that three men with ages 51, 75, and 77 have died after experiencing heat strokes in their homes. They were from Everett, Granite Falls, and Marysville in Washington.

The heat may have claimed the life of a worker on a nursery in Oregon, the worker safety agency of the state, known as Oregon OSHA, said on Tuesday.

The man who has passed away was from Guatemala and had arrived in the United States only a few months ago, according to Andres Pablo Lucas, the owner of Brother Farm Labor Contractor that provided workers for the nursery, including the person who died.

The person whose name has not been disclosed died at Ernst Nursery and Farm, a wholesale supplier in St. Paul, 20 miles (32 kilometers) north of Salem on Saturday amid sweltering temperatures. The death has been listed as heat-related by a database listed by Oregon OSHA. It is said that the employee was working on a crew moving irrigation lines.

The Scorching Heat Is Back In Kolkata Less Than Just 24 Hours after Cyclone Fani
Exciting News For Fans Tiny Harris And T.I. Harris Spotted On A Double Date With Cardi B And Offset
Earn money online at home without investment, Earn Money Online At Home
The United States To Impose Sanctions On Those Who Violate A United Nations Arms Embargo On Iran
Feds Pledge To Provide $305 Million For Indigenous Communities To Manage Corona Virus Crisis
Kylie Jenner Celebrating Father’s Day By Sharing Photos Of Stormi And Praised Travis Scott
Biden remains Close to Home as he Plans Blue-Collar Presidential Visits
Remedy’s Return With New Action Control At Unbelievable Prices
Music
Category
Latest News