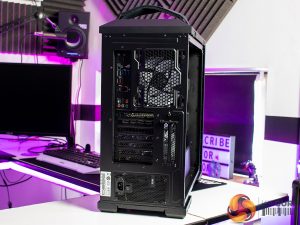 For the gamers of PC, there has always been an option of either purchasing a prebuilt system or assembling a gaming rig. Assembling a rig won’t be easy for someone who is not into DIY projects. Now, Fierce, the UK boutique PC builder boasts the Fierce PC Shuriken. The best of AMD is brought out by the Shuriken with the addition of a Ryzen processor and Radeon GPU.

Fierce PC wrote on their official website that Shuriken is one of their spectacular new gaming PCs that would provide a smooth gaming experience and immersive gameplay along with the unique case aesthetic, which the fans had been craving for. The opponents will tremble in fear when they will see the cold steel blades of Shuriken, and only one will come out as the champion among all the components.

Still, there are doubts that whether the Shuriken would be able to handle the demanding titles or the heavy applications and programs. The system is indeed powerful, and it is recommended by the company for power-consuming AAA titles such as CS: GO, GTA V, Battlefield V, Overwatch, Fortnite, PlayerUnknown’s Battlegrounds, and many more.

The Fierce PC Shuriken gaming rig system  is based on the Mid Tower case of Asus TUF Gaming GT501. The Shuriken can also be used with micro ATX, Mini ITX, ATX, and EATX form factors. On the other hand, a prototypical ROG experience is delivered by The ASUS ROG STRIX X570-F motherboard. It also provides a gripping blend of support, features, and cooling options.

As stated earlier, the best of AMD is brought out by the Fierce PC. It is built with powerful AMD Ryzen 5 3600 processor, supported by a base clock speed ranging from 3.6GHz to a maximum of 4.2Ghz in Turbo. To get the best graphics experience it is paired with Asus AMD Radeon RX 5700 8GB GPU. And, fantastic news for users is that a three months XBOX Game Pass is also being given with the two AMD components.

For gaming, memory and storage must also be taken into consideration. To make the gameplay smooth, Fierce PC has used a DDR4 Memory with the Shuriken, well to be precise, the 16GB ADATA XPG Spectrix. Coming to the storage, it has a 1TB ADATA XPG SX8200 PRO M.2 NVMe SSD. The extra six bays supported by the Asus TUF Gaming GT501 case, allows the game to expand as well.

Corsair RM750 ATX Power Supply and an Asus ROG Ryuo 240mm Liquid CPU Cooler are some of the other features that are supported by the gaming system. Gamers can even display their build with the help of the clear case, and the RGB lighting feature present in the RAM, motherboard, and the preinstalled cooler fans.

Fans can purchase the Fierce Shuriken on the Fierce’s official website. The performance of the game is superb but will cost you a fortune of worth $1,800, considering the fact that it also needs to be paired with a high-end gaming monitor for a rich experience. The gaming system is covered up by a 5 Year Prestige Protect Warranty.

Ghost Games And EA Confirm That Speed Cards Has Been Removed Need For Speed: Heat
Oscar-Winning Gone With The Wind Actress Olivia De Havilland Dies At 104
Cryptocurrency Legality Issues in Iran Are Increasing: New Regulations Coming Soon
Yoshihide Suga Elected As The New Prime Minister Of Japan After Shinzo Abe’s Resignation
Meghalaya HC judge stated that India should have been declared as Hindu Country after partition
Felicity Huffman released 3 days before the 14-day sentence for her role in the cheating scam
Global Politics Crushed Due to the Coronavirus Outbreak
It is Confirmed By Emirates Cricket Board To Have Received ‘Letter Of Intent’ From BCCI For Hosting ...
Music
Category
Latest News