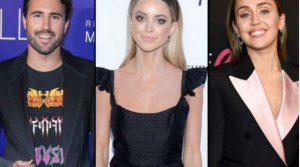 If the grapevine is to be believed, Miley Cyrus and Kaitlynn Carter reportedly dating is the hottest topic on the page right now. Although everyone is looking for traces to check whether this was an infidelity charge on Miley’s part, it is not true as the fling started supposedly after their marriage ended in separation.

Reports started pouring in when pictures of a gleeful Miley engaging in PDA with television personality Brody Jenner’s ex-wife Kaitlynn Carter on a vacation in Italy. All this took place right before their separation was officially announced.

This almost overlapping turns of events led many to think that the affair between these two women was the reason behind the split.

However, before pointing any fingers, we would like to clarify that it is not at all true.

Tabloid honcho TMZ confirmed that this unlikely fling started only after their split from their respective partners.

In other news, it was also reported that the post-marriage situation between Liam and Miley were hitting multiple rocks and they have been staying apart for a few months.

Miley wanted to make some changes and restore the spark by suggesting a couple’s therapy.

But Liam did not quite grasp the idea and was not ready to take equal charge of circumstances which led to their whirlwind relationship to come to an end.

On the other side, Brody Jenner and Kaitlynn Carter have been together for over 6 years, of which they dated for five years before getting married at their lavish Indonesian ceremony.

However, this wedding in Indonesia did not have any legal validity.

The couples were neighbors living in the same Malibu area and had gotten quite close with each other.

After Miley and Liam tragically lost their home in the wildfires last years, the couples became inseparable as per reports from TMZ.

Miley and Liam’s relationship gradient went up and down for ten years before they decided to settle down about eight months ago.

Do you think the split was worth all the drama? Have Miley and Kaitlynn found in each other something more than just a friend?

Kharkiv techno musician Daniel Daraban has come up with his musical riddle, ‘Conundrum (Original Mix...
As many as 30 injured in Floor collapse of Clemson University, South Carolina
Bytedance, The Owner And Co-Founder Of Tik-Tok Has Made Its Earnings Double In 2020
Producer Boney Kapoor will produce a remake of Egyptian film Hepta: The Last Lecture
Billionaire At 21 Kylie Jenner And Her Business Empire Climbs To Incredible Success
Rising singer Peter Lake’s ‘Bonfire Eyes’ makes you fall in love with living again with an uplifting...
‘Vaccinate With Love (Dedicated to Dr. Osterholm)’ by Peter Lake is the love vaccine we all need
Why Hip hop Duo Stryker & MFT of 50/50innertainment Continue to Stay Relevant
Music
Category
Latest News