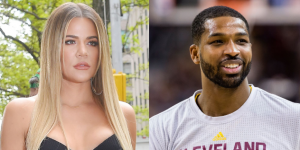 Khloe did the right thing by inviting her ex to their daughter True’s first birthday party. True’s lavish party was the first time the former couple appeared together publicly after their break up earlier this year.

Khloe Kardashian wanted to co-parent but ended up being ignored by the ace basket ballplayer. A short clip from the bash shows Khloe crying and feeling miserable about the whole thing and wanted True’s father to be present for their daughter’s sake.

Kim, on the other hand, got furious and was overheard saying to her close friend that Tristan doesn’t even speak to Khloe. It was very cordial of the mother of one to invite him after being cheated on.

But no matter what happened, Khloe Kardashian explains why she invited Tristan Thompson irrespective of the circumstances, which is understandable. Khloe wants to give her daughter the best memories from her first birthday party. Once True grows up she would want to look back at her childhood photographs and by inviting Tristan to the party she wanted to complete the family photograph.

Khloe further went on to compliment the father to her daughter by saying she knows he is a great person and truly loves and cares about their daughter. It was a civilized gesture for Tristan to not ignore the invite and show up for True.

Increments Of India Inc’s Are Growing Slow As 15% Growth Is Expected For Super-Specialized Profiles
Cryptocurrency Legality Issues in Iran Are Increasing: New Regulations Coming Soon
Justin Trudeau Makes Headlines By Slamming Leader Blanchet For Using Code Language In Attack
Mauritius Government Declares National Emergency After 1000 Tons Of Oil Leaked Into The Indian Ocean
Multi-Versatile Pop Diva Szandra Mayer is Back with another Hot ‘I LOVE YOU_ FINAL MASTER
Global Hip-hop’s Eccentricity through Melodic Excellence in RichPutt’s ‘She a Freak’ is Exemplary
25 year old Ukraine born woman arrested over prolonged harassment of 'the most beautiful' designer i...
5 Major Reasons Why You Should Hire Book Promotion Services in 2022
Music
Category
Latest News